Read It and Weep: Fungal Guttation

Some fungi are prone to exhibiting a curious phenomenon—they exude beads of moisture, called guttation. In several polypores, such as Fomitopsis pinicola, the liquid produced can look so much like tears that you'd swear the fungus was weeping. Or maybe sweating. Other species produce pigmented drops that can look like milk, or tar, or even blood.

Guttation is more well-known in some vascular plants. During the night, when the plant's transpiration system is shut down, pressure from excess moisture in the roots can force beads of sap out of special structures on leaf edges.

In fungi, the guttation mechanism is not so well understood. In many species, however, it's so often observed, particularly during times of rapid growth when temperature and humidity are favourable, that these beads of liquid can be a reliable macroscopic characteristic. Hydnellum peckii, for instance, so frequently "bleeds" pigmented drops in its early stages of growth that it's been given gruesome nicknames, including "Bleeding Tooth Fungus" and "Devil's Tooth." Coincidentally, a 1965 study found a compound in the fruiting body of  H. peckii that has anticoagulant properties similar to those of heparin, too much of which can make one bleed to death internally.

A few weeks ago, I came across a crop of Inonotus glomeratus on a maple log. I've found this amazing polypore a few times, once right after it had showered itself, and everything else around it, with what I assumed were millions of sulphur-yellow spores. The one I found this summer, though, was very young, and instead of spewing spores, it was weeping globules of "tar" in copious enough amounts that shiny black pools were accumulating on the forest floor. Unlike most guttation drops, which are watery, these exudations were thick and sticky and stained my finger and thumb a deep auburn brown. And kind of glued them together. Oddly, though this unusual guttation has been noted by others, there seems to be no mention of it in the literature. I. glomeratus is so unusual in so many ways, I've written a whole post about it.

Polypores and Hydnoids are not the only fungi to produce guttation. In moist conditions, young Suillus americanus stipes can be heavy with yellow-tinted drops. Guttation is also common enough in the uncommon Rhodotus palmatus that this characteristic is often included in descriptions. 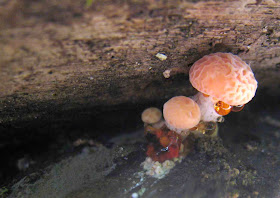 Guttation can happen in incredibly small ways, too. During the Toronto Bioblitz this past spring, we found some Lachnum subvirgineum that, despite what seemed like dry conditions, were covered in minute guttation droplets, as were most other Lachnum I've since come across.

Just yesterday I found another ascomycete sporting the same clear drops—this time Incrucipulum ciliare, whose hair-rimmed discs are even smaller than L. subvirgineum, hence, so, too, were its guttation droplets.


Another minute character is so characteristically bejewelled in guttation droplets, it's named for it: Pilobolus crystallinus, which is one of the "Cannon" or "Hat Thrower" fungi found on herbivore dung.

Or have different species evolved to produce guttation droplets for different purposes? The edible bolete, Suillus bovinus, for instance, has been shown in the lab to reabsorb nutrients from its guttation droplets, while leaving behind less useful byproducts, such as oxalic acid. So perhaps guttation has evolved as an efficient method of expelling waste for some fungi.

Is that what's going on with Inonotus glomeratus? Is that viscous, black ooze just a collection of rejected metabolic byproducts? If anyone would like to analyze it and has the means, I have some dehydrated exudate that I'd love to send you!

Erast Parmasto, Andrus Voitk, (2010). Why Do Mushrooms Weep? Fungi, Vol. 3:4
N.B. In my original post, relying on the above article, I had repeated that Fomitopsis pinicola does not produce guttation drops in Newfoundland. Andrus Voitk has since kindly informed me that, in fact, they regularly do, as he notes in Omphalina Vol. III, No. 3.